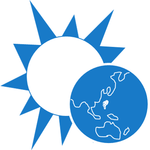 The experience of radio communications for most people in Taiwan would come from using mobile phone, wireless, and Bluetooth. These frequencies generally do not affected by space weather. However, some radio signal of particular frequencies are reflected by the ionosphere or penetrated through the ionosphere. These radio signals may be interfered or interrupted due to the rapid changes of space weather.

At frequencies in the 1 to 30 mega Hertz range (known as “High Frequency” or HF radio), the changes in ionospheric density and structure modify the transmission path and even block transmission of HF radio signals completely. There are several types of space weather that can impact HF radio communication. In a typical sequence of space weather storms, the first impacts are felt during the solar flare itself. The solar x-rays from the sun penetrate to the bottom of the ionosphere (to around 80 km). There the x-ray photons ionize the atmosphere and create an enhancement of the D layer of the ionosphere. This enhanced D-layer acts both as a reflector of radio waves at some frequencies and an absorber of waves at other frequencies. The Radio Blackout associated with solar flares occurs on the dayside region of Earth and is most intense when the sun is directly overhead.

Another type of space weather, the Radiation Storm caused by energetic solar protons, can also disrupt HF radio communication. The protons are guided by Earth’s magnetic field such that they collide with the upper atmosphere near the north and south poles. The fast-moving protons have an affect similar to the x-ray photons and create an enhanced D-Layer thus blocking HF radio communication at high latitudes. During auroral displays, the precipitating electrons can enhance other layers of the ionosphere and have similar disrupting and blocking effects on radio communication. This occurs mostly on the night side of the polar regions of Earth where the aurora is most intense and most frequent.

There are over 2000 artificial satellites in use. They can be found in geostationary, Molniya, elliptical, and low Earth orbits and are used for traditional point-to-point communications, mobile applications, and the distribution of TV and radio programs. Satellite communications tend to use high frequency signals: Ultra High Frequency (UHF), 300 MHz - 3 GHz and Super High Frequency (SHF), 3 - 30 GHz. Radio signals propagating to and from a satellite in orbit are affected by the environmental conditions along the propagation path. In a vacuum, radio signals propagate at the speed of light, but in the presence of plasma in the ionosphere, the signals are affected by group delay and phase advance and attenuation due to absorption and scintillation. The environment's effect on the signal is frequency dependent and to a first approximation is proportional to the amount of structure in the plasma present along the propagation path.

Due to ionospheric variability (Space Weather), the effects on propagating signals are highly variable. Up to some level, the effects of Space Weather on propagation can be mitigated through engineering design solutions, but space weather can lead to a total loss of communication due to attenuation and/or severe scintillation when the broadcast signals cross the ionosphere. In trans-ionosphere propagation, scintillation refers to the rapid variation of the amplitude and phase of a received signal. Scintillation is produced by structure in the ionosphere. The severity of scintillation depends on the frequency of the used signal and the spatial structure of plasma density and plasma drifts along the propagation path. Specifically, scintillation at the receiver is produced by constructive and destructive interference of refracted and diffracted components of the broadcast signal.

The use of single and dual frequency satellite radio navigation systems, like the Global Positioning System (GPS), the European Galileo system, and the Russian GLONASS system.has grown dramatically in the last decade. GPS receivers are now in nearly every cell phone and in many automobiles, trucks, and any equipment that moves and needs precision location measurements. There are several ways in which space weather impacts GNSS function. GNSS radio signals travel from the satellite to the receiver on the ground, passing through the Earth’s ionosphere. The charged plasma of the ionosphere bends the path of the GPS radio signal similar to the way a lens bends the path of light. In the absence of space weather, GPS systems compensate for the “average” or “quiet” ionosphere, using a model to calculate its effect on the accuracy of the positioning information. But when the ionosphere is disturbed by a space weather event, the models are no longer accurate and the receivers are unable to calculate an accurate position based on the satellites overhead.

Drag is a force exerted on an object moving through a fluid, and it is oriented in the direction of relative fluid flow. Drag acts opposite to the direction of motion and tends to slow an object. As an example, think of running against a high wind and feeling the drag pushing you back in the direction of relative fluid flow. This same force acts on spacecraft and objects flying in the space environment. Drag has a significant impact on spacecraft in low Earth orbit (LEO), generally defined as an orbit below an altitude of approximately 2,000 kilometers. Although the air density is much lower than near the Earth’s surface, the air resistance in those layers of the atmosphere where satellites in LEO travel is still strong enough to produce drag and pull them closer to the Earth.

The drag force on satellites increases during times when the Sun is active. When the Sun adds extra energy the atmosphere the low density layers of air at LEO altitudes rise and are replaced by higher density layers that were previously at lower altitudes. As a result, the spacecraft now flies through the higher density layer and experiences a stronger drag force. When the Sun is quiet, satellites in LEO have to boost their orbits about four times per year to make up for atmospheric drag. When solar activity is at its greatest over the 11-year solar cycle, satellites may have to be maneuvered every 2-3 weeks to maintain their orbit.

In addition to these long-term changes in upper atmospheric temperature and density caused by the solar cycle, interactions between the solar wind and the Earth’s magnetic field during geomagnetic storms can produce large short-term increases in upper atmosphere temperature and density, increasing drag on satellites and changing their orbits. During the March 1989 storm event, for example, the NASA's Solar Maximum Mission (SMM) spacecraft was reported to have "dropped as if it hit a brick wall" due to the increased atmospheric drag.

One of the great discoveries of the 19th century was the realization that a time-varying magnetic field is able to produce an electrical current in a conducting wire. The basic idea is that the time rate of change of the magnetic flux (i.e. lines of magnetic force) passing through a current loop is proportional to the current that is generated around the loop. Time-varying magnetic fields and electrical current systems are not just artificial phenomena, but in fact are quite common in nature too. Natural electrical current systems which vary in time can be found inside the Earth, in the oceans, and in the upper atmosphere of the earth (above ~100 km) where the constituents of the atmosphere include positively charged ions and negatively charged electrons which move about in a myriad of complicated ways. Many of these upper atmospheric current systems are constantly present and modulate in a regular way in response to the rotation of the earth, the gravitational pull of the moon, and the slow variation of solar radiation over the course of the solar cycle. At times, though, these current systems can be greatly enhanced and exhibit rapid changes with time and space, a phenomenon typically referred to as a geomagnetic storm. Geomagnetic storms in turn are caused by disturbances that propagate away from the Sun, travel through interplanetary space and interact with Earth’s space environment.

Artificial electrical circuits began to grow with the advent of electrical power systems. This complicated collection of circuits is threaded by naturally produced magnetic flux and just like the telegraphs, rapid variations of this magnetic flux during geomagnetic storms causes a naturally produced current to flow through the system. This effect was first reported after the 24 March 1940 geomagnetic storm (Davidson, 1940; see also Germaine, 1940 for reports of effects on long-line communication cables). Numerous large and moderate impacts to the grid have been reported over the years, including a power blackout in 1958 (Lanzerotti & Gregori, 1986), equipment tripping and voltage stability issues (4 August 1972), a nine-hour blackout in Canada and a transformer loss (13 March 1989 - see photo), and a blackout in Sweden during the October 2003 storm.

Space weather events occur when the Sun causes disruptions to aviation communications, navigation and surveillance systems, and elevates radiation dose levels at flight altitudes. In order to avoid damage to crew or the chips and equipment on the aircraft due to excessive radiation when flight is flying at high latitudes, some countries have made regulations to limit the routes and conditions of flight. In recent years, the International Civil Aviation Organization (ICAO) has also conducted assessments and studies on the impacts of space weather for civil aviation. After further amendments to aviation meteorological regulations, space weather has been included in the necessary provision of civil aviation meteorological services since November 2019. Refer to the documents, and when severe weather occurs, the responsible space weather center will issue a code to inform all flights.

All weather on Earth, from the surface of the planet out into space, begins with the Sun. Space weather and terrestrial weather (the weather we feel at the surface) are influenced by the small changes the Sun undergoes during its solar cycle.

The variability of the Sun's output is wavelength dependent; different wavelengths have higher variability than others. The total wavelength-integrated energy from sunlight is referred to as the Total Solar Irradiance (TSI). It is measured from satellites to be about 1365.5 Watts/m2 at solar minimum to 1366.5 Watts/m2 at solar maximum. An increase of 0.1% in the TSI represents about 1.3 Watts/m2 change in energy input at the top of the atmosphere. This energy is scattered, reflected, and absorbed at various altitudes in the atmosphere, but the resulting change in the temperature of the atmosphere is measurable. It should be noted that the change in climate due to solar variability is likely small, but more research needs to be done.

The duration of solar minimum may also have an impact on Earth's climate. During solar minimum there is a maximum in the amount of Cosmic rays, high energy particles whose source is outside our Solar system, reaching earth. There is a theory that cosmic rays can create nucleation sites in the atmosphere which seed cloud formation and create cloudier conditions. If this were true, then there would be a significant impact on climate, which would be modulated by the 11-year solar cycle.